Kazu opened up last month, and replaced Kokoro (which was pretty bad to me, to be honest). Kazu is owned and operated by Japanese staff, hence the authenticity and detailed preparation of their dishes.

I came here with some friends, and couldn’t stop thinking about how damn good their sashimi was and ended up coming for dinner again the next day. This post is a combination of my last two visits (with more to definitely come in the future).

The restaurant itself isn’t that big, but the seating is comfortable and not cramped. The past two times I came here, they had two very friendly staff working. Their English isn’t perfect, but they worked really hard and were really friendly. 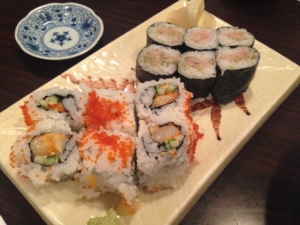 On the first visit with our friends, the boyfriend ordered the chopped scallop and negitoro roll.  I had a bite of the negitoro roll, and just like the salmon sashimi, I was in love and impressed with how delicious and fresh it was. The tuna was incredibly soft, and melted in your mouth. As for the chopped scallop roll, it was pretty average but there was nothing bad about it. The sashimi really takes the spotlight at Kazu.

We ordered this on a whim after seeing it advertised on the wall. This was the squid karage, it was very crunchy and the lemon juice that we squeezed on top really enhanced the flavours of the squid. We would have liked it better if the tentacles were cut up into smaller pieces instead of two big pieces. It was a bit hard to eat that way, this way was messier and harder to eat without burning your mouth. 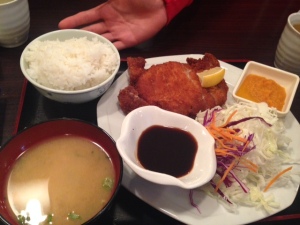 For our entree on the first visit, we ordered the tonkatsu, which came with miso soup, salad, and a bowl of rice. The tonkatsu was very juicy and crunchy, tasting exactly like how my Japanese grandma in law (I realized that made me sound like I was married… I meant that my uncle married my aunt, who was from Tokyo oops LOL)  would make it in Tokyo. I’m not sure what the salad dressing was, but I’m pretty sure it was made fresh in the restaurant daily, as I noticed that the paste began to separate after 25~ minutes. The salad was very fresh too, and the miso soup was average. 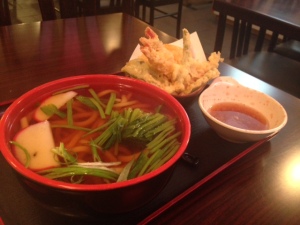 For the second visit with just the boyfriend, we wanted something warm since it was pouring rain that day. We decided to get the tempura udon. Again, this was pretty good. You can tell how clear the broth is, since you can see the noodles at the bottom. It came with chopped onions and different veggies. The broth was a bit salty, but we didn’t find ourselves thirsty after having it. As for the tempura, I was happy that it came with two pieces of shrimp. A unique thing about Kazu was that they served green pepper and string bean tempura, which we haven’t seen before. So the tempura came with shrimp, string bean, green pepper, squash, and yam.

Up next for our second visit was the BC Roll. I didn’t try this since I’m not too big of a BC roll fan, and I had my salmon sashimi (first picture above) already. He really enjoyed the BC Roll and was impressed with how much juicy salmon meat was inside. They definitely did not cheap out on the salmon.

It is quite small and hidden, but the quality and taste of their sashimi is undeniable and top notch for what you pay for. If you’re not a big fan of sashimi, then I wouldn’t recommend that you come here as their cooked dishes are pretty standard. But if you’re a sashimi lover like me, do yourself the favour and check this place out.