Rajio. Radio? Rajio. Japanese izakayas, or Japanese tapa bars, have become a common thing in Vancouver the past few years. Izakayas are a great place to wind down and relax, enjoy some drinks, and delicious food in a great and loud atmosphere. Emphasis on the loud, it is tradition for servers and kitchen staff to belt out greetings and thank you to every customer that walks in and out of the doors. I personally love izakayas, my favourite in Vancouver is Suika. But of course, I’m always up to try new izakayas, especially one that is a sister restaurant of Suika. 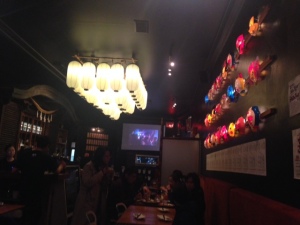 I apologize in advance for the grainy pictures, lighting was a bit dim inside. Walking in, we were greeted with loud welcomes in Japanese. At first glance, I loved the juxtaposition of cartoon characters and rustic, historic Japanese decor.

We were seated by the front in a small circular table, the type that you would see in a small coffee shop. From this table, we had a good view of the restaurant and the street. We went during a promotion last month, which came with four of their food items (the first four down below).

We started off with the Bagna Cauda ($6.80), an assortment of veggies with their in-house made dip consisting of garlic, anchovy, olive oil, and Japanese sweet mayo. Admittedly, I never eat enough veggies and I’m also not a big fan of them either. However, the sauce was what completed the meal for me. It was creamy and had a light garlic taste that went really well with the fresh and crunchy vegetables. Definitely not your average veggie dip, we were left wanting more and discussing how we could try to recreate the dip at home. It was a good starter and filled us up.

Up next was the sashimi salad ($8.80). Again, the greens in the salad were very fresh and crispy. The dressing was also very delicious, and the tobiko added a savoury and crunchy taste to the salad. The tuna sashimi was incredibly soft and melted in our mouth. Again, just like with the veggie dip, we were left wanting more… are you starting to see a reoccurring theme here? Hehe 🙂

One of Rajio’s specialties is their kushikatsu. Kushikatsu originated in Osaka, Japan, and is a very popular street food. It is basically either deep fried veggies or meat that comes on a skewer, with a special kushikatsu dipping sauce. The dipping sauce was very dark and opaque, and came in a mason jar. We were told to not double dip, I was also reading that in Japan, some of the restaurants reuse their sauce with other customers. I seriously hope this isn’t the case and it probably isn’t due to Vancouver’s high health standards. Anyways, we were given an assortment of veggies which I can’t recall, and a chicken skewer. The veggies still packed a lot of flavour despite being deep fried and dipped in sauce. 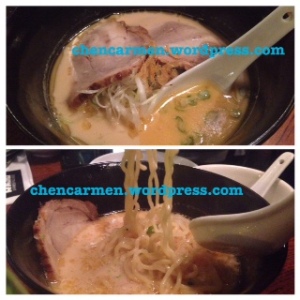 Our ebi ramen came next. I actually preferred the oxtail ramen at Suika, their sister restaurant, more. The noodles were bouncy and cooked well, and the pork was very moist and tender.

After all our food came from the voucher, we wanted to see what else Rajio had to offer. We ordered the peking wrap ($7~), which for some mysterious reason, I can’t find on their menu or anywhere on the internet!! The peking wrap tasted exactly like the traditional Chinese wraps, it came with the usual hoisin sauce, fresh white onion, and meat. The dough of the wrap was very soft. The only difference was that it wasn’t Peking duck and the chicken was deep fried, but I enjoyed it nonetheless. 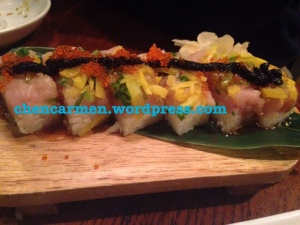 Every time the boyfriend and I go out to eat Japanese food, it is not complete unless we order some sort of negitoro roll. But this time, we upgraded and got the negitoro battera ($9.80), pressed sushi with tuna belly, scallions, daikon, and sesame. Just like the sashimi salad, I enjoyed the freshness and taste of the tuna sashimi but I found the daikon taste a bit too overpowering. I let the boyfriend finish this plate off since he liked it more than I did.

Last but not least, squid karage ($6~)! Hm, just noticed that deep fried food seems to be an occurring theme in this visit.. oops. It was love at first bite. The squid was very crispy and crunchy, jam packed with flavour and I wished this plate would never ever end.

Our food was undeniably delicious, and with every dish, we we left wanting with more. Staff seemed a bit disorganized as our drinks were forgotten, only to have arrived twice at different intervals after we asked them. Our ramen came twice as well. We were told that our additional items after the set menu would take awhile since it was busy, fair enough. We ended up waiting 30 minutes in between, good thing we weren’t in a rush. I’m glad that we came a bit earlier and beat the rush. Rajio, you have stolen my heart much like your sister!