Summer is quickly approaching and we took an opportunity last week to enjoy a patio dinner with a great view. Tap and Barrel offers a huge selection of craft beer, which in my opinion tastes a lot better than your regular beers.

So, before you say you hate beer, give craft beer a try. I’ve been here two other times in the past but never had a chance to try their dinner menu. Here’s how it went! 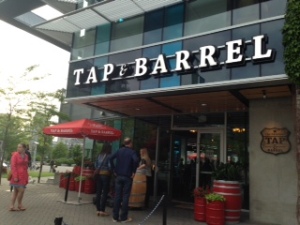 We came on a Friday evening, so we expected a long line up since it was a warm night. Fortunately for us, they had a patio seat right away! The patio was buzzing with energy and chatter, almost all the seats were taken!

I loved the decor of the patio, it was very simple and had a west coast contemporary feel to it. The tables were wooden, and all the chairs were red. As the night progressed, we came to realize that the glass wall on the patio was very thick and sturdy. It was a bit windy but we didn’t feel a breeze or cold at all, even when it got dark. 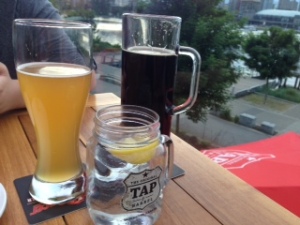 We ordered two beers. I got the Phillips Chocolate Porter and the boyfriend got the Vancouver Island Brewery Summer Ale. 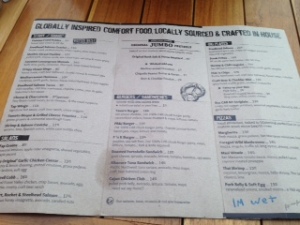 We had no idea what to order since we’re used to only coming here for beer! I was a bit disappointed because I saw a few menu items on Urbanspoon that looked really good, but unfortunately weren’t on the menu that day. 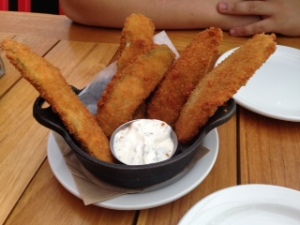 For appetizers, the boyfriend wanted deep fried pickles ($5.45). The deep fried pickles were cut very thick, and the batter was very crispy. I found these to be quite oily, but was very tasty. I was also impressed at how big the portion was. The dipping sauce was a mix of sour cream and dill, which went really well with the pickles. 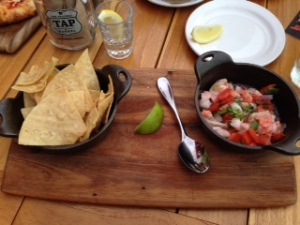 We also ordered the shrimp and salmon ceviche ($11.95). I was a bit disappointed with the portion, as I expected it to be bigger (minus the tortilla chips). But nonetheless, there was an abundance of shrimp and salmon in the ceviche. The boyfriend squeezed the life out of the lime, so it was pretty sour to the point where it didn’t accentuate the taste.

Yes, I know that’s not the restaurant’s fault but just be careful of how much lime juice you add into the ceviche, especially if it’s a small bowl. But when you used the tortilla chips to top off the cevice, the sourness was a bit diminished. 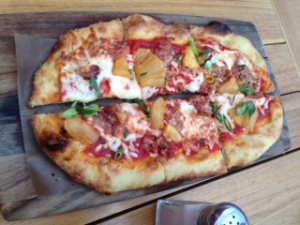 For our main dish, we finally decided on their “Maui Wowie” pizza. All their pizzas are hand stretched, hence it being a bit unsymmetrical, and baked in a wood stone oven. It came with tomato sauce, mozza cheese, pulled bacon, and cayenne roasted pineapples. It was pretty average, but I liked how doughy the pizza was and that it wasn’t too greasy. The pineapples really saved the dish, otherwise it would have been really bland. 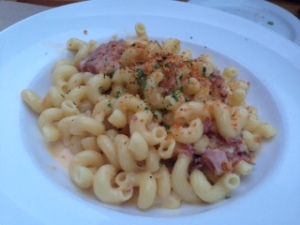 We also decided to order their mac and cheese, with pulled pork for an added $3 ($15 total). This dish was a total disappointment to us as it lacked any cheese flavour and was lukewarm. We felt that we could have made this better at our own house. The only saving grace about this dish was the pulled pork, but there wasn’t that much to the dish. 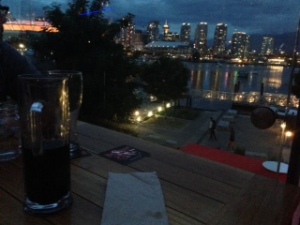 By the end of our dinner, the sun had set and the city lights were slowly coming to life under the night sky. It was beautiful, we ended up staying a bit longer just to enjoy the view. Tap and Barrel offers a great and delicious selection of beer, but their food options are a a bit hit and miss. But when an establishment’s specialty is beer, and they do that right, you can’t really complain.

It was a pretty busy night, so our server was quite busy but she tried her best to talk to us when she could, which we appreciated. I can’t say I’ll be back for the food, but definitely for patio drinks!