A lazy Sunday calls for staying at home in cozy blankets, PJs, and watching Netflix while eating a disgusting amount of corn nuts. Oh, and catching up on blogging too of course. Apart from Toulouse, we also stopped by and tried Mio sushi on a whim. Our result to Mio was a result of indecisiveness, hunger, and convenience.

It was quite sad that after arriving in Seattle for a mere 28 hours, I was already missing and craving Asian noodles. In particular, I was craving udon soup as well so we set out on what would be a thirty minute indecisiveness, constant scrolling on Urbanspoon until we found Mio. There were other places as well, but we didn’t want to drive and we also didn’t want to spend a lot of money in the downtown core.

We were pleasantly surprised at how fast of a walk Mio was from our hotel! I was a bit iffy on walking there because the streets were pretty dark and we had to pass a big dark, unlit park which has probably seen better days… but I was assured that it would be safe to walk, turns out it was a pretty nice day for a brief stroll.

This location of Mio was located right outside of the downtown core, in the South Lake Union neighbourhood. The area looked pretty new, nice, and trendy. Kind of reminded us a bit of Yaletown but more commercial. We were the only customers when we came in around 8:30 pm.

As mentioned, I knew what I was going to order before stepping in. They had a seafood and nabeyaki udon. I got the nabeyaki udon ($9 usd) since it was cheaper than the seafood udon, and all I really wanted was just udon. It came in a cute stone bowl with a handle, and I was warned the bowl was very hot. I would have liked the tempura on the side because it got really soggy, but it was good nonetheless.

There were also some pan fried string beans, but it got pretty soggy and didn’t taste super fresh. Apart from those two very minor hiccups, this bowl of udon was exactly what I wanted, and was delicious. The broth was very flavourful, and a tad salty. It came with perfectly cooked and a decent amount of udon noodles, and imitation crab meat. I liked how there was a lot of seafood as well, it was a good addition as well as the fresh green onion garnishes.

The boyfriend ordered the Gyu ramen. The ramen was really disappointing. It lacked flavour, depth, and was very plain. Perhaps we were just used to amazing ramen in Vancouver, but this bowl was not appetizing. He also mentioned that the ramen noodles tasted like instant noodles… yikes. 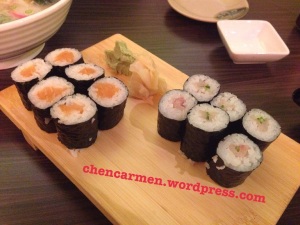 To split, we ordered the salmon and yellowtail roll. Yellowtail roll is the same as negitoro roll, it confused us at first. Both rolls were very fresh and flavourful, pretty decent. The price was a bit steeper than we were used to for a casual Japanese joint at $4.75 USD per roll, but we did enjoy the freshness of it so we didn’t mind.

The rolls and udon were satisfying and delicious, but I wish we could say the same about the ramen. Service was pretty attentive, fast, and nice (well then again, we were the only customers in the restaurant!). Mio looked very clean, new, and had hints of pink accents throughout the restaurant. This looked like a place that would be really busy during lunch hours on the weekdays, but it was very quiet that night and they closed early after we finished eating. It was a good and convenient place to grab a quite bite since we were in the neighbourhood.